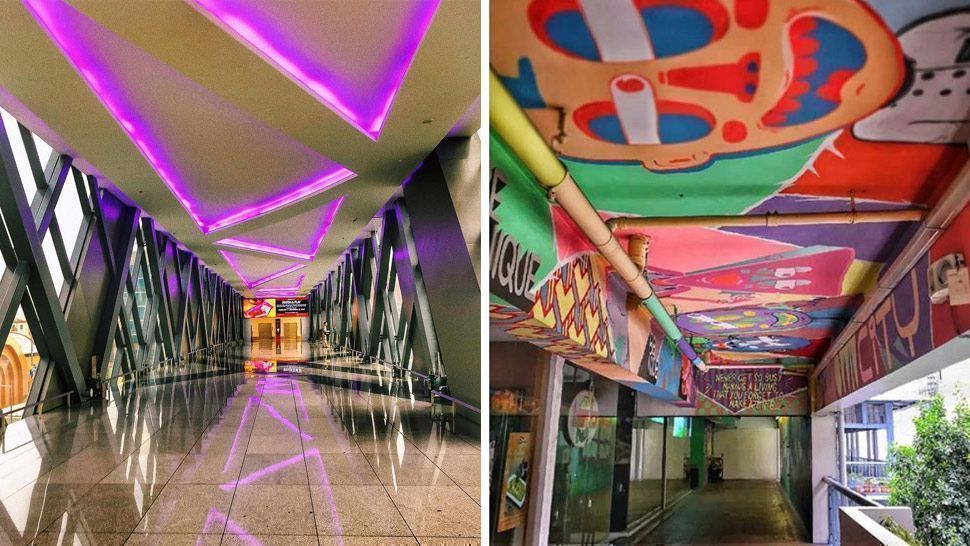 Some feature murals and captivating colors

Pedestrian safety, unfortunately, is not a strong suit for Metro Manila. We've given up sidewalks—where commuters can actually walk—to make way for street vendors or road widening (the extra lanes usually ending up being used as parking); infrastructure projects are always mired in controversy (*ehem* 10-million footbridge in Kamuning); and walkways are often poorly lit and not ideal for use at night. There are certain places, however, that give pedestrians a glimmer of hope, whether an underpass with the most inspiring murals or an overpass with beautiful landscaping.

Makati City is known for its many underground walkways that can easily take commuters from one street corner to another without having to play patinteroagainst rushing cars. Not only are these convenient for residents and professionals walking around the business district, they also showcase Filipino talent through lively splashes of color and intricate sketches. Take, for example, the Makati-Ayala Underpass, which features the signature female-themed design of Kookoo Ramos and whimsical patterns by Quatro Los Baños.

Nothing is more #extra than the Ortigas CBD Elevated Plaza in Pasig City. It features wide pedestrian areas, covered walkways, and a fountain with a dome! Designed by architect Paulo Alcazaren and his design firm PGAA Creative Design, it's a great option for commuters who'd rather walk than wait for hours amid traffic in the congested intersection of Doña Julia Vargas Avenue and F. Ortigas Jr. Road.

If you're wondering what the future of Philippine contemporary art holds, the Salcedo Underpass has a mural-sized answer. It's the collective work of the winners of Shell's National Students Art Competition, which is the longest-running art competition for young Filipino artists. The artists include Ferd Angelo Failano of the University of the Philippines; Mark Espina, Wesley Almazar and Mark Laza of Eulogio “Amang” Rodriguez Institute of Science and Technology; Chrisanto Aquino of Tarlac State University; Catherine Salazar, Kyle Balagtas, Ermaine Manucay and Arnesto Ibanga of Technological University of the Philippines; and Francis Andrade of Bulacan State University. 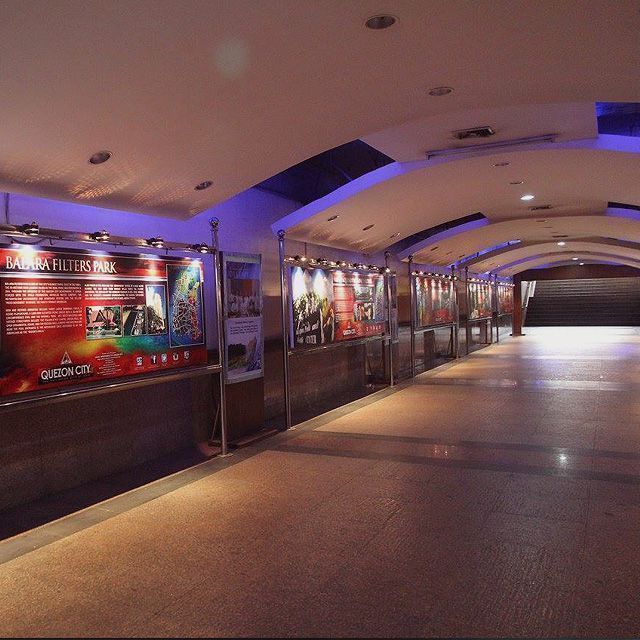 The Quezon Memorial Circle is connected to its surroundings through two underpasses: One located in front of the Quezon City Hall and another in front of the Philippine Coconut Authority. This network of underground walkways is spacious enough to have rows of retail stores and food booths available for commuters. Last renovated in 2009, the well-lit halls also feature a photo exhibit on Quezon City's history.

Considering the City of Manila’s rough-around-the-edges reputation, walking through an underpass in the city might be the last thing on anyone’s mind. We wouldn’t say that the underpass connecting Manila City Hall and Intramuros is any different, but it does have one thing that’s worthy of braving the crime and grime: A secondhand bookshop. Books From Underground sells pre-loved books and even rare-to-find literary classics at very affordable prices, so make sure to check out shelves when you’re in the area.

Newport City, including its entertainment center Resorts World Manila, is a usual stopover for when you've just arrived at the Ninoy Aquino International Airport or about to leave the Metro. Thanks to a spacious walkway called Runway Manila, which was opened in April 2017, walking from the airport to the entertainment complex and vice-versa became safer and more convenient. It's air-conditioned, has walkalators and elevators, and some cool neon lights for your photo ops. 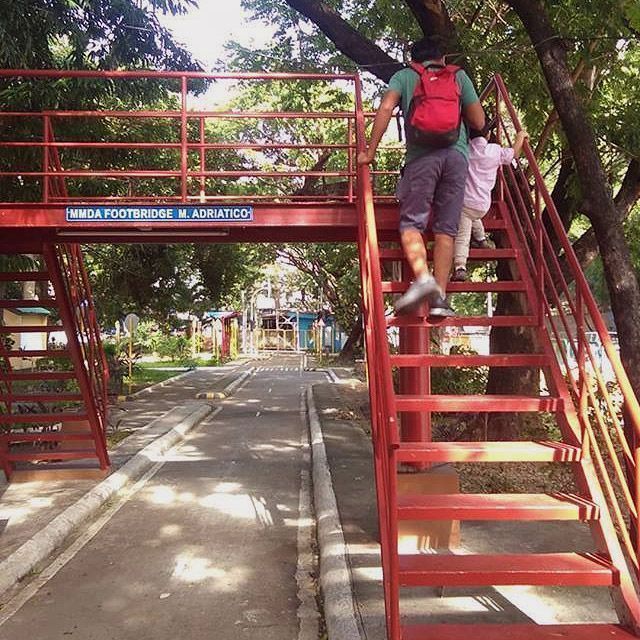 Because of the (very) short distance that it covered from one sidewalk to another, this mini-footbridge was once slammed online as the "weirdest project in the world" and a "waste [of] money." Unknown to many, it isn't actually a pedestrian overpass but rather a tool for training kids on road safety. (That’s #FakeNews for you.) It's located within Paraiso ng Batang Maynila, a public children's park in Malate, Manila, where there are small versions of walkways, pedestrian and bicycle lanes, waiting sheds, and stop signs.

The Paseo Underpass (a.k.a. Security Bank Underpass) features Daniel Tingcungco's "Rocket Launcher." As you can probably tell from the name itself, commuters are brought to an out-of-this world warpzone just by walking through the underground walkway.

The Dela Rosa Elevated Walkway, dubbed as the country’s longest overpass at 1.1 kilometers long, connects V. A. Rufino Street and Salcedo Street in Makati City. It's now the most convenient way to get from Ayala MRT Station all the way to Makati Medical Center—if you'd rather walk than sit through traffic jams. There are also escalators so PWDs don't have to worry about accessing the elevated walkway. 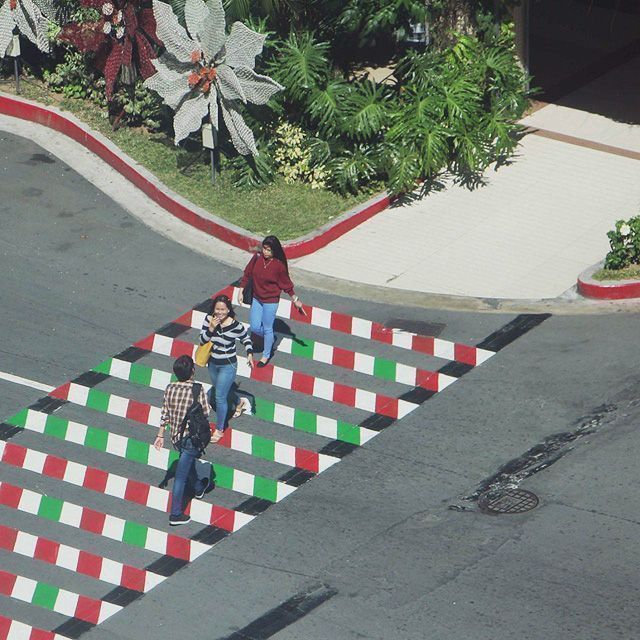 Be on the lookout for Araneta Center's ever-changing pedestrian lanes, which you can specifically find on the corner of General Malvar Avenue and General Aguinaldo Avenue. In June, the entertainment and shopping complex celebrated Pride Month with rainbow-themed lanes; in October, they supported Breast Cancer Awareness Month with pink-colored pedestrian walks; and this December, commuters are reminded of candy canes through the red-and-green-colored roads.