Empire East is building its most luxurious mixed-use development yet.

The cost of living in Metro Manila is expensive, especially when you account for the prices of necessities — from gasoline to groceries — that are always on the rise.

And real estate, whether you are renting or buying, is one of the most significant investments you have to make. And the price goes way up if you want to live near your office in Makati or Pasig.

Empire East Highland City is a 24-hectare large-scale, mixed-use township development poised to be the first “elevated city” in the Philippines. Its 38 residential towers will be built “on stilts,” a distinctive architectural feature that will put the buildings almost 6 meters above the ground. Doing so preserves the land’s natural contours and seamlessly merges the development with the environment.

For P7,977.05* a month, you can experience luxury living at Empire East Highland City with all the modern conveniences you’ll need.

Here’s more of what you can expect from the development:

It will offer living spaces that fit different lifestyles.

Whether you’re starting out on your own or with a young family, you can find the ideal space to nest and rest from a selection of studio type, one-bedroom, and two-bedroom units. They range from 21.38 to 46.5 square meters and are located across the 38 towers with more than 30 floors each and collectively known as Highland Residences.

Here’s a sneak peek at artist’s renderings of how a one-bedroom unit would look like: 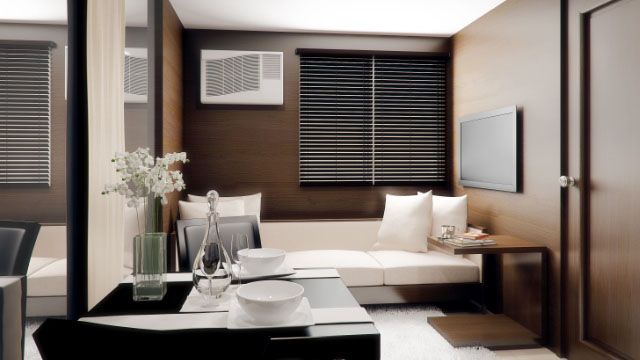 Its units will feature impressive views.

The units will be bright, airy, and look out to panoramic views of the lush hills of Antipolo and beyond. You’ll surely savor every moment you spend in your home.

Its amenities will allow for a carefree yet active living experience.

Aside from its residential area, Empire East Highland City will also include a park, a mall, and a sports club.

The sprawling, 8,000-square meter Highland Park will serve as a nature sanctuary with lush plants, trees, and breakout areas. It will feature access to a beautiful 500-seater church and the Highland Mall. Developed by Megaworld, the mall will house upscale stores and premium restaurants.

For those seeking an active start to the day, the Chartered Club will boast high-end leisure amenities including a swimming pool, a tennis court, a basketball court, and an archery range. Double up on your workouts at any of these facilities before recovering at the sports club’s in-house lounge or café.

It is located near central business districts and family-friendly destinations.

It’s not hard to imagine future residents of this integrated city, finding it hard to leave all of its modern comforts and conveniences. But you’ll be happy to know that commuting will be a breeze, as Empire East Highland City is set to rise along Felix Avenue, a major thoroughfare with access to main roads leading to business districts in Metro Manila and family-friendly, tourist spots in Rizal.